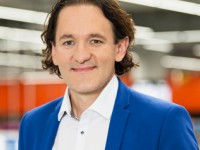 Martin Wild has been Chief Digital Officer (CDO) of MediaMarktSaturn Retail Group since May 2014. One of the pioneers of digital retail, at the age of 18 he founded the online electronics store Home of Hardware (hoh.de) in 1997, selling it a decade later to Premiere (now Sky Germany). He has been on the management of MediaMarktSaturn since 2011. As Vice President Multichannel, he handled the launch of saturn.de, his subsequent positions including CEO of redcoon. In his role as CDO, Martin Wild now heads the digital strategy and transformation of the entire MediaMarktSaturn Retail Group. He was recently included in Handelsblatt’s list of the 100 smartest people in Germany. Whenever robots make deliveries, customers are guided through Saturn by means of augmented reality, or the retail sector is shaken up by innovative start-ups and established retailers working together in the Retailtech Hub accelerator, Martin Wild and his team are usually responsible