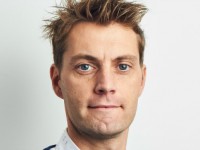 He has a background in the telecom industry and in online payment and e-commerce services. He has held several sales, marketing, strategy, innovation and management positions.

Back in 2006 he has lead the development of mobile payments in Belgium. He was in charge of the m-payments strategy at Belgacom/Proximus and has launched services such as Mobile Parking and Mobile Bus Ticketing and has lead several partnerships and acquisitions of mobile payment start-ups. In 2010, he joined Tunz - a fintech start-up active in mobile and e-commerce payments -  as commercial director. In 2011 he became the managing director of Tunz. Since end 2012, Tunz is part of the Ogone/Ingenico group. In 2015 he became director of the business unit in charge of e-wallet and e-money services and was member of the Ingenico e-Commerce executive committee.

Since april 2016 he is heading the global e-commerce activity and the innovation roadmap at Van de Velde.